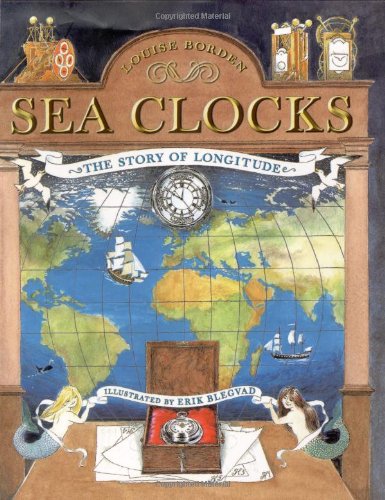 SEA CLOCKS: The Story of Longitude

With clean, well-honed text, Borden ( ) steers this complex picture book about John Harrison, the British clockmaker who solved the "biggest scientific problem" of the 18th century, straight into her audience's grasp. To demonstrate the importance of accurately measuring longitude, a challenge that stumped "famous astronomers and scientists and ship captains and kings," the author explains that without knowing how "far west or east a ship [was] from its home port," a ship could sail in the wrong direction, or take too long to reach its destination and run out of food and water, or succumb to numerous other problems. In 1714, the English Parliament announced it would award 20,000 pounds (equal to several million dollars today) to anyone who could "solve the longitude problem." John Harrison, a provincial self-taught clock-maker, decided to try his hand by making a clock that worked at sea—and spent more than 40 years perfecting his work (and another dozen years before King George III forced Parliament to recognize his achievement). Blegvad's ( ) pen-and-ink illustrations—sometimes watercolored, often elegantly black-and-white—offer finely crosshatched views of the era, paying close attention to ships and rigging, timepieces, carriages, clothing and other period details. Stately where Kathryn Lasky and Kevin Hawkes's recent (also about Harrison) is playful, this fascinating tale is likely to quicken readers' interest in history and science. Ages 7-10.