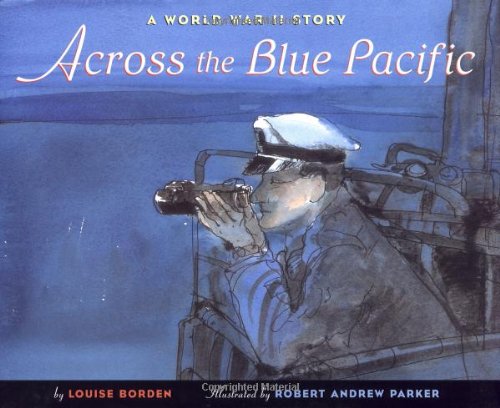 Across the Blue Pacific: A World War II Story

Borden ( ) explores how war touches the lives of those seemingly far-removed from battle, partly basing this poignant story on her uncle, Theodore Taylor Walker, a WWII submariner lost at sea. Third-grader Molly Crenshaw lives next door to Ted Walker, who in 1943 serves on a submarine in the Pacific. Molly's first-person account offers snippets of her daily life in a presumably Midwestern town; she listens to broadcasts of baseball games, attends Beechwood School and writes to Ted. The free-verse narrative travels easily between Molly's life back home and what she imagines Ted's experience might be like aboard a submarine. The author intersperses facts about the war and submarines (e.g., submarines are named for fish and can be as long as a football field), and she links the two worlds together via a large world map painted by students ("There were so many islands./ Submarines like Ted's / were helping to capture those islands back,/ rescuing pilots shot down over the sea/ or figuring out where enemy fleets were"). Parker's ( ) trademark pen-and-ink and watercolor wash illustrations alternately depict scenes from the submarine and from Molly's daily life. Drab gray and pale brown hues dominate the illustrations as people grieve when Ted goes missing in action just before Christmas. This elegant book speaks to the far-reaching effects of war and the healing power of memory. Ages 6-10.