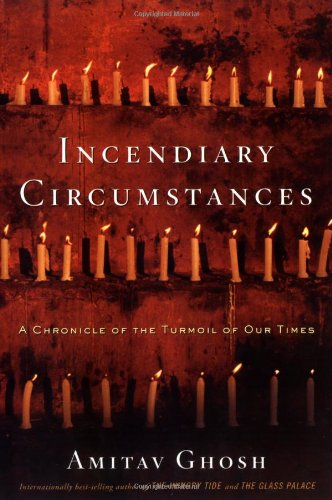 Incendiary Circumstances: A Chronicle of the Turmoil of Our Times

This absorbing collection of essays by novelist, journalist and travel writer Ghosh ( ) covers some two decades of catastrophe and upheaval, from sectarian violence in his native India during the 1980s through the September 11 attacks (which he watched from his home in Brooklyn) to the recent Indian Ocean tsunami. With an eye for evocative detail, he illuminates the human dramas behind the headlines: the plight of tsunami refugees trying to rebuild their lives and finances after every bank record and piece of ID is lost to the waves; the courage of ordinary Indians protecting their Sikh neighbors from rampaging Hindu mobs. Ghosh also includes trenchant essays about the ideologies that fuel the developing world's turbulent politics, arguing in one, for example, that religious fundamentalism is "not a repudiation of but a means of laying claim to the modern world." He is equally engaging when he turns from current affairs to literary essays on, say, the international culture of novel reading or Kashmiri poet Agha Shahid Ali. The volume also includes a number of travel pieces, among them a sprightly look at America's Four Corners tourist trap. Written in luminous prose with unusual understanding, these essays offer an insightful look at a chaotic world.