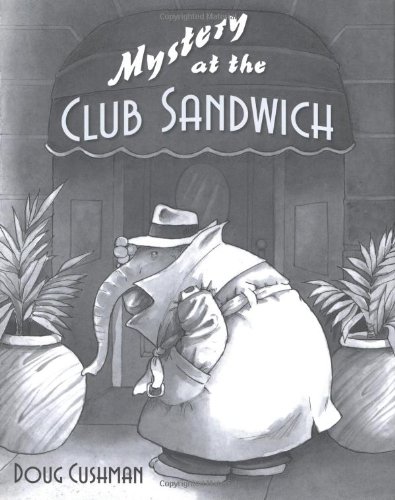 MYSTERY AT THE CLUB SANDWICH

In this black-and-white spoof of noir cinema and , pachyderm detective Nick Trunk investigates a foxy lounge singer who literally has lost her marbles. Nick takes the case from a kitten named Maggie Trouble who works backstage at the Club Sandwich and conceals her showbiz aspirations. "I work for peanuts," the world-weary elephant grumbles, so Maggie prepays him in brittle and they proceed to the nightclub. Nick next meets Maggie's boss, a real vixen. "Every night, before I sing, I hold my marbles," the fox tells Nick, and now her lucky charms have vanished. Nick soon finds a mysterious trace of "very peanut butter." Other, less delicious clues arise, but Nick stubbornly samples peanut-butter confections; readers have to wait for him to catch up with their deductions. This amusing buildup trumps the conclusion, in which the perp's intentions remain cloudy and the punishment (jail) seems excessive (given that the marbles are hidden in almost plain sight). Cushman (the Aunt Eater mysteries) pays homage to and with his protagonist and a dedication to "Sam, Phil and Dashiell." Charcoal-tinged duotone watercolors, a 1939 calendar and a femme fatale set the smoky ambience, and Nick's baggy-eyed expression, rumpled trench coat and jaded hands-in-pockets slouch are those of a seasoned movie P.I. Cushman sets the generic pieces in place, but his faux-crime story wraps up less effectively than parodies such as last season's by Scott Nash. Ages 5-9.