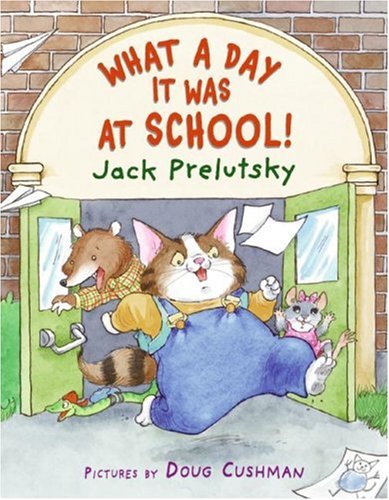 What a Day It Was at School!

Prelutsky ( ) packs a school-day's worth of adventure and mayhem into this collection of light verse. The poems unfold as journal entries by an overalls-clad tabby, which also serve to answer Mom's inquiry about his day. (An illustration opposite the table of contents sets up this premise.) The school-age set will recognize the oft-discussed topics: food fights, field trips and the embarrassing passing of gas during class, among others. The author metes out doses of humor over the course of the 17 poems. In "I Wish I'd Studied Harrder," the laughs lie in the intentional misspellings ("I tried to spell ,/ But really I just gessed.../ If I had stoodied harder/ Then I mite have passed this test"), and "A Man Named Mister Hoobybatch" recounts an author visit: "He's giving recitations/ From his stories in the gym./ He's written many children's books—/ We've never heard of him." (The frog poet in the spread also appears above the author bio.) Some observations may escape younger readers (e.g., Prelutsky pokes good-natured fun at "Show-And-Tell," as each student parrots, "I like my plant,... hamsters,... tying knots a lot"). Cushman's (the Aunt Eater series) playful cartoon artwork of the all-animal cast may garner knowing smiles from adults, too: a lion teaching fractions bears a striking resemblance to Einstein, while the illustration for "I Have to a Write a Poem for Class" features a raven squawking, "Nevermore." Ages 5-up.