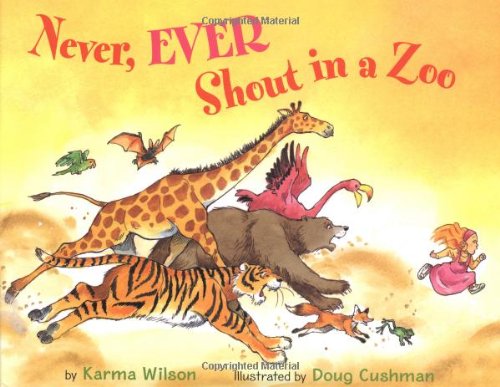 NEVER, EVER SHOUT IN A ZOO

Don't even think about ignoring the title admonition, warns the unseen narrator in Wilson's ( ) humorous cautionary tale, "because if you do... might happen." To underscore the message, the author adds what becomes a refrain: "Don't say I didn't warn you." Sure enough, when a scoop of ice cream falls off a young visitor's cone and she wails in despair, she not only triggers an ever-growing stampede of animals, but also ends up being locked in a cage by a wily gorilla. Wilson works hard to build a sense of mounting comic doom with repetition and alliteration: "And if the moose escapes, he might trot by the apes! All... those... apes. All those apes. All those apes that love to play practical jokes!" But author and artist rein themselves in, stopping short of conjuring an entirely manic mood. Cushman's (the Aunt Eater mysteries) marauding animals, while skillfully rendered in watercolor and pencil, are just a bit too tame and small in scale to represent a tongue-in-cheek collapse of the social order. Still, his redheaded, on-the-run heroine has a repertoire of alarmed expressions worthy of a silent movie heroine, and he makes good use of the book's horizontal format—keeping all the action on the same plane to emphasize the ever-growing chase. Ages 3-6.