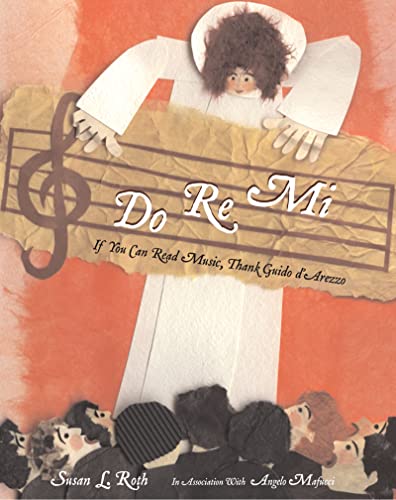 Do Re Mi: If You Can Read Music, Thank Guido d'Arezzo

A thousand years ago," Roth ( ) begins, "if you heard a song and wanted to hear it again, you would have to remember it by heart. If you forgot the song, it could be lost forever." Italy's Guido d'Arezzo (990–circa 1050) changed all that with a system of musical notation that allowed people to read music much as they read words in a book. Roth tells the story of d'Arezzo's invention con brio, portraying him as a misunderstood, driven and ingenious hero—with the sympathetic ear of just one lone monk. He had to buck the status quo ("What would I do all day if children could learn songs without me?" says Guido's teacher) and he used many sheets of parchment noodling out the system that finally—and brilliantly—translated music into staves, clefs and notes. Roth's naïf collages, populated by doll-like figures, quickly shoo away any misgivings that music history could be a bore, and make a marvelous counterpoint for her carefully researched prose. Music lovers will appreciate the visual riff at the bottom of the spreads, which emulates the five lines of the musical staff. When Guido finally proves that his invention works (as the children's choirmaster, he asks them to sight-read a piece of music), his triumph resounds through the ages. And his story is certain to capture the imagination of any budding musician. Ages 5-8.