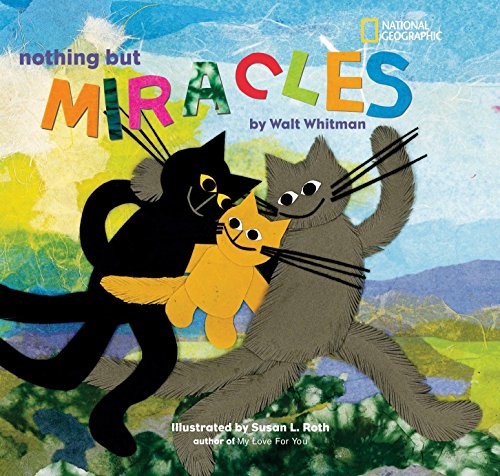 Excerpting the bulk of a poem included in a late edition of , Roth ( ) describes a parallel between her own medium and Whitman's verse; she writes in an endnote that the poem "draws together diverse wonders of the world into a cohesive whole. For me this is the essence of collage." While Roth's argument is compelling and her work distinguished, the verbal and visual "collages" unfortunately do not add up to a cohesive picture book. Parted from the synthesis of the original poem, the version excerpted here is also parted from many of its meanings, and reads only serviceably, as a list of "miracles" experienced whether the narrator "wade[s] with naked feet/ along the beach/ just in the edge of the water,/ Or stand[s] under trees in the woods, " etc. The illustrations, however, are frequently dazzling, relying on Roth's expert blending and layering of thin, textured paper for highly nuanced, evocative land- and skyscapes. A particularly striking sunset image, for instance, incorporates a complex design and well-honed sense of color. The artist introduces a cat family (one child, two adults), who explore the world together, to unify the disparate scenes and to create something of a story line. While precise and detailed cuts suggest fur on the animals, their flat, almost cartoonlike appearance within otherwise subtly patterned compositions give the cats the appearance of floating against the backgrounds rather than inhabiting them. An ambitious experiment, if not wholly a success. Ages 3-6.