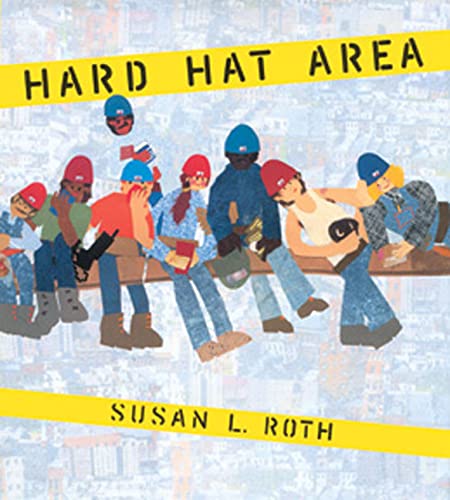 Combine the aesthetics of accomplished collagist Roth ( , reviewed Sept. 27) with a day-in-the-life tale of a female ironworker apprentice, and the result is a standout construction book. The dialogue-driven text follows Kristen (inspired by a real-life, fourth-generation New York City ironworker) through her morning as she scales the building's skeleton and takes orders for the raising gang's (or "group of ironworkers") tools and snacks ("I could use some batteries for this telephone and a big iced tea with lemon," the signal man tells her). Along the way, Kristen (and readers) learns the ropes of the 10 crew jobs. (The plumber upper, for example, shows her how to check the bubble in his level to make sure the column is "straight up and down.") Roth elucidates unfamiliar words and techniques with brief annotations set in slightly smaller type and numbered with bright yellow circles, which correspond with the technique or tool in the illustration. By creating barebones characterizations of cut-paper and cloth (Kristen herself is distilled down to a mass of blonde fiber hair, two dot eyes and a blue bump for a hard hat), Roth keeps the focus on the dramatic rise of the building and beautifully conveys what it feels like to move among the criss-crossing girders high above the city streets (represented in photomontage with images from actual Manhattan work sites). She brings alive the ironworkers' sense of community, and how they embrace anyone willing to start at the bottom and work their way up—make that way, way up. Ages 5-up.