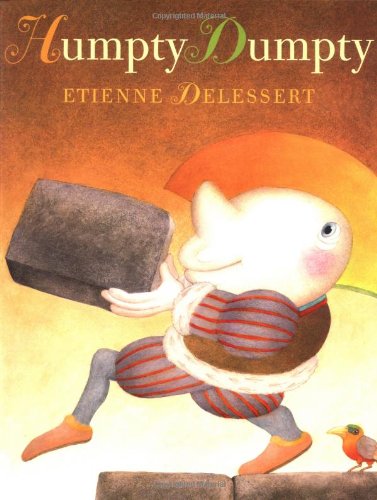 Delessert ( ) imagines King Humpty Dumpty as a pop-eyed, deluded monarch who lives a life of ease in a castle surrounded by miserable peasants. It's their discovery of his wealth, Delessert proposes, that prompts King Humpty to build the wall around his castle even higher, and his fall during its construction that the famous nursery rhyme commemorates. The formidable paintings of King Humpty's hallucinogenic gardens and the pig-nosed bunnies who wait on him provide ironic counterpoint to passages of text describing his pampered life. "After a nap, King Humpty practiced the art of archery. His crossbow had been made especially for him in Switzerland." The spread shows a row of servants with apples on their heads, cowering as the king takes aim. The story looks headed for a cheerful ending, possibly with the peasants rowing on King Humpty's pond after his demise, a conclusion younger readers might have welcomed. But these peasants are so downtrodden that even their oppressor's death doesn't relieve their misery. "The peasants, in a humble ceremony, laid him to rest on their side of the fence. Then they wandered back into their night," it ends. A fascinating exercise in imagination, but a disheartening read. Ages 5-8.