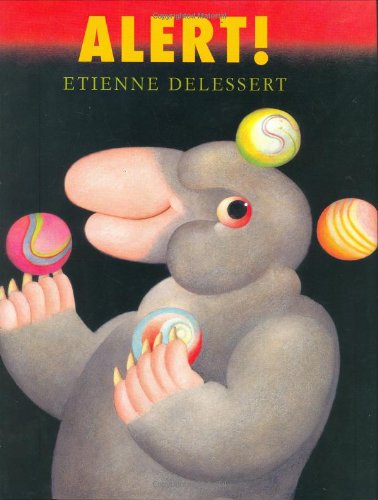 Delessert ( ), whose bulbous-snouted, glittery-eyed creatures are instantly recognizable, returns with a dark fable about the power of thought. Tobias, a chubby mole with glassy orange eyes, lives a quiet life in a network of tunnels, eating insects and collecting beautiful little stones. One day another mole admires Tobias's collection, but warns him that a band of robbers has been seen in the area: "They especially love shiny pebbles." A portrait of mental disintegration unfolds as Tobias moves his tiny treasures frantically around his tunnels in an attempt to hide them. "He heard soft steps in the dark, and a voice whispered, 'Tobias, Tobias, watch out.' " Realizing at last that there's no way he can keep his treasure safe, he falls into an exhausted sleep. Delessert paints Tobias's head encircled with scarlet tentacles of terror and exhaustion. A tale like this might end with Tobias realizing his silly visions were all a dream; however, Delessert depicts Tobias awakening to find his collection gone and a nasty note from the neighbor—"Thanks for the treasure. Keep the last pebble. Enjoy!" Tobias's cheerful resolution not to let himself be controlled by fright again may not dispel for younger readers the darkness of the hero's earlier fears. Yet Delessert's willingness to enter the recesses of Tobias's mind—a world mirrored in the tortuous tunnels he digs—shows how seriously he takes children. Ages 4-8.