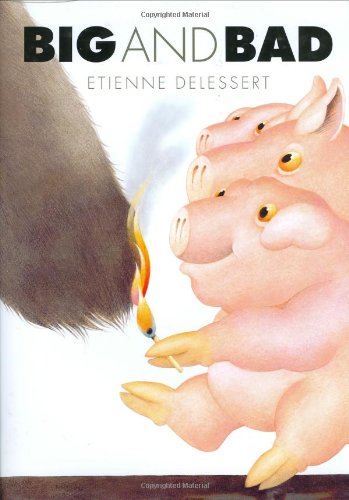 With his large-scale, unflinching illustrations, Delessert ( ) turns a retelling of the Three Little Pigs into a metaphor about dangerous marauders and how to stop them. The jacket art gives barely a hint of what’s to come; the three pigs stand in a column, eyes glinting, as the first holds a flaming match to a furry tail. The tail’s owner, the wolf Big and Bad, is so unslakeable in his greed that a fox warns, “Soon the planet will be too small for his appetite.” Clever cats choreograph a plot to bring him down, using the unwitting pigs as bait and enlisting the construction skills of beavers, birds and badgers. Neither Delessert’s words nor his pictures are for the faint-hearted. Describing the wolf’s taste for fur hats, for example, Delessert shows him looking ridiculous in a cap with seven cats’ tails—but with a chicken foot protruding from his jaws, the fur around them red with blood. Unlike some of Delessert’s earlier titles, in which existential dilemmas lead to murky conclusions, this book arrives at a decisive—if vengeful—climax. What distinguishes Delessert’s work is the willingness to explore images of evil—images from which most contemporary picture books shrink, but which lurk nevertheless in the nightmares of children. His tale is an unlikely homage to those of his literary forebears, the Brothers Grimm. Ages 4-8.