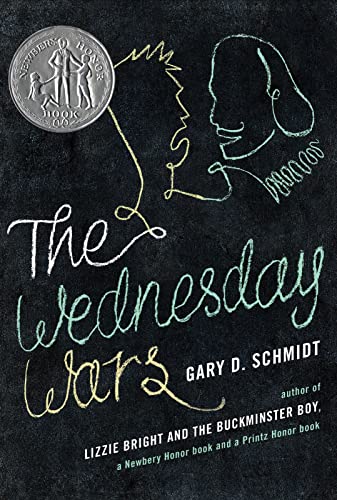 On the first day of the 1967–68 school year, Holling Hoodhood thinks he's made a mortal enemy of his new teacher when it turns out he's the only seventh-grader who does not leave early every Wednesday to attend Hebrew school or catechism. (Holling is Presbyterian, and though eminently likeable, he does have a knack for unintentionally making enemies.) Stern Mrs. Baker first gives him custodial duties, but after hilarious if far-fetched catastrophes involving chalk dust, rats and freshly baked cream puffs, she switches to making him read Shakespeare. He overcomes his initial horror, adopting the Bard's inventive cursing as his own to dress down schoolyard bullies. Indeed standing up for himself is the real battle Holling is waging, especially at home, where his architect father has the entire family under his thumb. Schmidt, whose won both Printz and Newbery Honors, delivers another winner here, convincingly evoking 1960s Long Island, with Walter Cronkite's nightly updates about Vietnam as the soundtrack. The serious issues are leavened with ample humor, and the supporting cast—especially the wise and wonderful Mrs. Baker—is fully dimensional. Best of all is the hero, who shows himself to be more of a man than his authoritarian father. Unlike most Vietnam stories, this one ends happily, as Schmidt rewards the good guys with victories that, if not entirely true to the period, deeply satisfy. Ages 10-14.