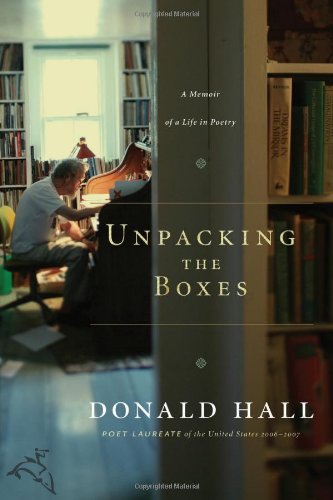 Unpacking the Boxes: A Memoir of a Life in Poetry

This brisk and likable new memoir by the prolific and plainspoken former U.S. poet laureate Hall ( ) covers the years before and after the period he and the late poet Jane Kenyon famously shared. After a childhood divided between his beloved rural New Hampshire and frustrating suburban Connecticut, he devoted himself in high school to poems, composing lines (“Dead people don't like olives”) at all hours. He felt out of place at a prestigious boarding school, but at home at 1940s Harvard, where he met Frank O'Hara, Edward Gorey, John Ashbery, and Robert Bly (who would become Hall's closest friend). Over a series of moves—back and forth between England and the U.S. (he considered Oxford University “a party school”), he finally left academia to live in New Hampshire with Jane Kenyon. He became a successful professional poet and a prolific freelance writer, meeting and working with George Plimpton and with the widow of the actor Charles Laughton, Eva La Gallienne. The memoir's last segment is by far its most affecting: the afflictions of grief and of old age—a stroke, trouble driving and walking, a scary manic episode—join up with the pleasure and ironies of late-life fame.