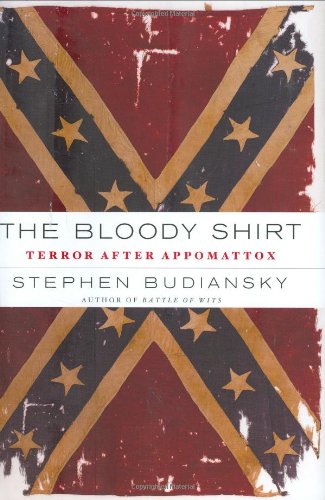 The Bloody Shirt: Terror After Appomattox

Journalist and military historian Budiansky ( ) pulls no punches in this hard-hitting examination of the most sordid aspects of Reconstruction in the South from 1865 to 1876. The “brutal war of terrorist violence” that he surveys certainly has not escaped the history books. But this worthy effort goes a long way toward highlighting the most venal aspects of how, in the 10 years after the Civil War, the white Southern power structure managed to erect the Jim Crow laws that for nearly a century legalized many aspects of racial discrimination. Budiansky also highlights “men and women of courage, idealism, rectitude, and vision” who confronted the establishment: Pennsylvania-born U.S. Army major Lewis Merrill, who fought the Ku Klux Klan in South Carolina; Prince Rivers, a former slave and Union army Colored Troop sergeant who became a state legislator and trial judge in South Carolina; and Maine-born Adelbert Ames, a Union general who served as Mississippi's provisional military governor. Budiansky brings the unpleasant details of the era alive in a smoothly written narrative.