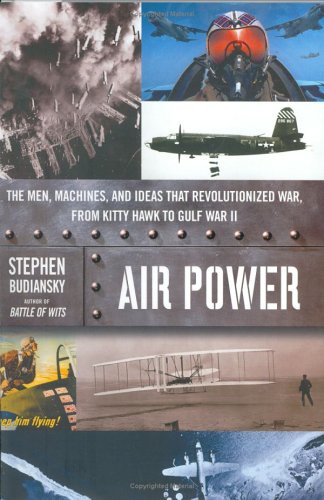 For the aviation buff with a passion for history, this survey from veteran national security correspondent Budiansky ( ) will be a must. Budiansky has plumbed a plethora of the right sources to assemble an eminently accessible and accurate survey of the evolution of military aviation during the 20th century, with an emphasis on U.S. and British experience. From a succinct account of the development of powered flight in the early part of the century, Budiansky moves on to its military application by the world's armies during WWI and its "coming of age" during WWII, cleverly interweaving technical advancements that have directly affected military aviation with the fighting man's point-of-view. World War I, the Spanish Civil War, World War II, the Korean War, Vietnam, the 1991 Gulf War and the Iraq campaign of 2003 are all covered accurately and succinctly, as is the context necessary to understand the air warfare component of each. From the propellers and airfoils of the Wright brothers to the stealth aircraft of today, the important technological developments and innovations made in aircraft design are all here, simply and clearly explained. The research is extensive and thorough, and more than 100 images concretize all the tech talk and descriptions of action. The mention of the air warfare theories of John Boyd, developed during and after Vietnam, that revamped air force fighter tactics and design, comprise just one of myriad rewarding byways in this comprehensive project. 40-plus airplane diagrams; 35 maps and illus.; two 16-page b&w photo inserts totaling 87 images (not seen by .