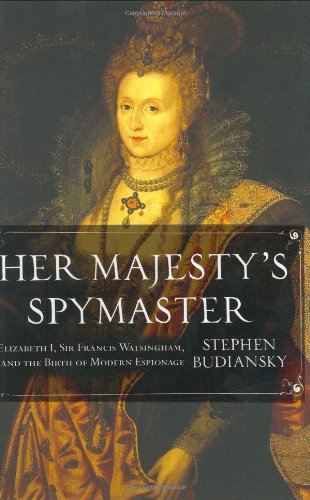 Her Majesty's Spymaster: Elizabeth I, Sir Francis Walsingham, and the Birth of Modern Espionage

Rising from humble roots, Sir Francis Walsingham is a model of a certain type of Elizabethan figure, thriving at an innovative court that preferred service by men of talent rather than by the high nobility. As Queen Elizabeth's secretary of the Privy Council, Walsingham coordinated a number of official and unofficial spy networks, historian Budiansky relates in this fresh look at the Virgin Queen's reign. Corresponding equally with ambassadors and shadowy informants, supervising code breakers and couriers, teaching himself the rules of watching and waiting, Walsingham developed influential models for the roles of secretary and spymaster. Additionally, according to Budiansky, at a time when religion was very much intertwined with both internal and external politics, he proved an early example of the political mindset that put national devotion above religious sentiment. Diplomatic intrigue and attempted conspiracies are natural threads to weave through the stories of Elizabeth's marriage negotiations; her struggle to create a religious settlement; her rivalry with Mary, Queen of Scots; and the defeat of the Spanish Armada. Even readers who are already versed in Elizabeth's reign will find Budiansky's new angles on a much-examined era enlightening.