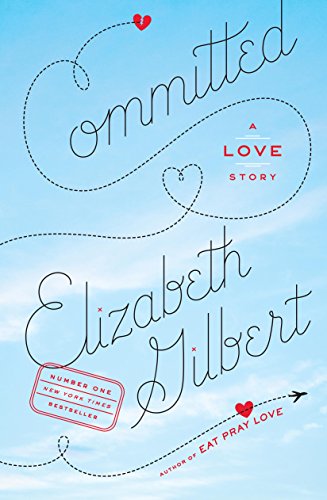 How does an author follow up a smash international bestseller that has catapulted her from obscurity into fame and riches she never dreamed of? Very carefully.

, Elizabeth Gilbert's first book since the multimillion-selling , was written so carefully that it's actually her second attempt (she scrapped the first one after she decided the voice was wrong). The good news is her voice is clear and winning. The bad news is the structure doesn't work. Part history, part travelogue, often makes for a jumpy read. Still, Gilbert remains the spirited storyteller she was in , and her central question is a good one—how can a divorce-scarred feminist make a case for marriage?

ended in Bali with Gilbert falling in love with Felipe, a hot, older Brazilian divorcé. Book clubs across the country passionately debated her message: “Is Gilbert saying I need a man to be happy?”; “What if I go to Bali and don't meet the love of my life?”; and “How did a woman who didn't want children land the only Latino hottie with a vasectomy in all of Indonesia?”

In the year following their meeting, Felipe and Gilbert cobbled together a long-distance relationship; he would stay with her in the U.S. for 90-day jaunts, and the rest of the time they'd live apart or travel the world. One day in the spring of 2006, they returned to the Dallas Airport and Felipe was detained at the border. A customs agent said he could not enter the country again unless he married Gilbert.

Gilbert spent the next year in exile with Felipe—straining the relationship—and did a lot of reading about marriage. In jaunty, ever-curious prose she tells us that today's Hmong women in Vietnam don't expect their husbands to be their best friends; that in modern Iran young couples can marry for a day; and that early Christians were actually against marriage, seeing it as antireligious.

It's all fascinating stuff, but ultimately Gilbert is more interested in the history of divorce than marriage. The reader can feel both her excitement when she tells us that in medieval Germany there were two kinds of marriages, one more casual than the other, and her rage when she recounts the ill effects of the Church on divorce as it “turned marriage into a life sentence.”

For all of its academic ambition, the juiciest bits of are the personal ones, when she tells us stories about her family. There's a great scene involving the way her grandfather scattered her grandmother's ashes, and a painfully funny story of a fight Gilbert and Felipe had on a 12-hour bus ride in Laos.

The bus is bumpy, the travelers exhausted, and both feel the frustration of not being able to make a home together. They bicker, and she tries and fails at a couples-therapy technique, and a “heated silence went on for a long time.” Later in the story, when she is hemming and hawing about the Meaning of It All, he says, “When are you going to understand? As soon as we secure this bloody visa and get ourselves safely married back in America, we can do whatever the hell we want.” I am happy for Gilbert that she did a lot of research before tying the knot again, but she already did the most important thing a gun-shy bride can do: choose the right mate.