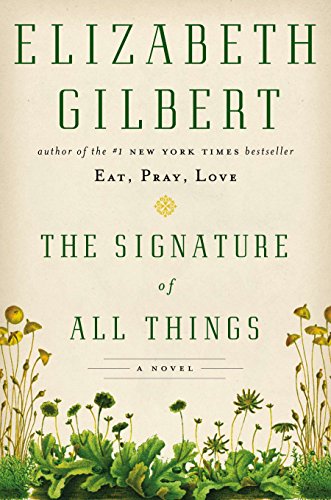 The Signature of All Things

After 13 years as a memoirist, Elizabeth Gilbert (Eat, Pray, Love) has returned to fiction, and clearly she’s reveling in all its pleasures and possibilities. The Signature of All Things is a big, old-fashioned story that spans continents and a century. It has an omniscient narrator who can deploy (never heavy-handedly) a significant amount of research into the interconnected fields of late 18th- and early 19th-century botany, botanical drawing, spiritual inquiry, exploration, and, eventually, the development of the theory of evolution. The story begins with Henry Whittaker, at first poor on the fringes of England’s Kew Gardens, but in the end the richest man in Philadelphia. In more detail, the story follows Henry’s daughter, Alma. Born in 1800, Alma learns Latin and Greek, understands the natural world, and reads everything in sight. Despite her wealth and education, Alma is a woman, and a plain one at that, two facts that circumscribe her opportunities. Resigned to spinsterhood, ashamed and tormented by her erotic desires, Alma finds a late-in-life soul mate in Ambrose Pike, a talented botanical illustrator and spiritualist. Characters crisscross the world to make money, to learn, and, in Alma’s case, to understand not just science but herself and her complicated relationship with Ambrose. Eventually Alma, who studies moss, enters into the most important scientific discussions of the time. Alma is a prodigy, but Gilbert doesn’t cheat: her life is unlikely but not impossible, and for readers traveling with Henry from England to the Andes to Philadelphia, and then with Alma from Philadelphia to Tahiti to Holland, there is much pleasure in this unhurried, sympathetic, intelligent novel by an author confident in her material and her form. Agent: Sarah Chalfant, the Wylie Agency. (Oct. 1)
close
Details