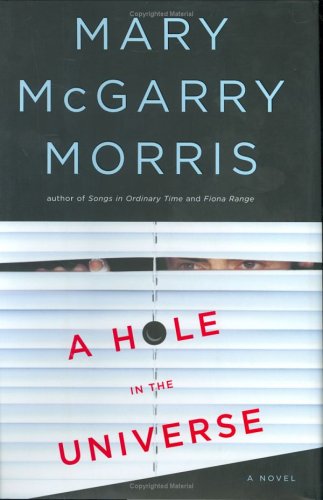 A HOLE IN THE UNIVERSE

What happens when a 43-year-old man returns to live in his hometown after serving a 25-year prison sentence for murder? That is the dramatic question at the center of this fifth novel by Morris ( ; ). A contemporary Rip Van Winkle, Gordon Loomis returns to the home he left at age 18 to find a deteriorating neighborhood, overrun by drug dealers and mired in poverty. Gordon's brother, Dennis, sister-in-law Lisa and loyal friend Delores can all forgive Gordon for his crime, but he can't forgive himself. Though expertly drawn, Gordon is an enigmatic figure. Is he a bland and dull-witted giant ("three hundred and fifty pounds, six and a half feet tall") who just wants to be left alone or a paragon of virtue? Is Gordon's interference in his brother's marriage wrongheaded meddling or blessed intervention? When he aids Jada, a teenage neighbor whose mother is a junkie, is he asking for trouble or lifting up an oppressed and innocent child? Because he is a known ex-convict, Gordon becomes the neighborhood scapegoat, punished for his good deeds by those he seeks to help and protect. Only besotted Delores believes wholeheartedly in Gordon's goodness. Though Delores does eventually win Gordon's affection, he is alternately repulsed and comforted by her desperate loneliness and overeager attempts to help other people. Once again, Morris scores with her sympathetic portrayals of hard-to-like heroes and hopelessly floundering outcasts, infusing them with humanity. The plot picks up pace toward the end, reaching a fevered pitch as Gordon faces new (and unfounded) accusations, and the novel comes to a redemptive but satisfying and believable conclusion.