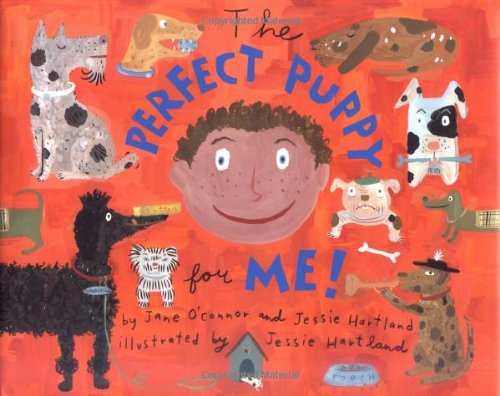 THE PERFECT PUPPY FOR ME!

Two paws up for this lively canine compendium, which introduces kids to a kennel's worth of dog breeds. Undecided about what kind of dog he wants, a boy surveys the pups owned by his friends and relatives. There's Dollface, a bulldog nicknamed "Dragon Breath"; Claudine, a poodle who loves to eat butter; and Tidbit, a spunky terrier who tangles with a skunk and must bathe in tomato juice. Into these engaging puppy portraits O'Connor () and newcomer Hartland sprinkle information about the breeds (Jack Russells were named after a 19th-century British dog breeder; Newfoundlands have webbed feet), canine care (dogs can't digest chocolate) and training tips (when teaching a dog to sit, "Use a hand signal"). Written in childlike script, these fun facts and accompanying spot illustrations act as a snappy counterpoint to lengthier chunks of narrative and Hartland's full-bleed exuberant illustrations. A spread of a dog run, for instance, packs in delectable trivia ("Small dogs tend to bark more than big ones"; "Basenjis don't bark, they yodel"). She's adept at capturing the dogs' individual personalities (she shows Duke, a loyal German shepherd, carting his owner's groceries). For its boundlessly energetic images, its down-to-earth tone and its smart advice ("Dachshunds are good city dogs. They don't need much exercise"), this book wins Best in Show. A wonderful starting point for kids who want a dog. Ages 3-8.