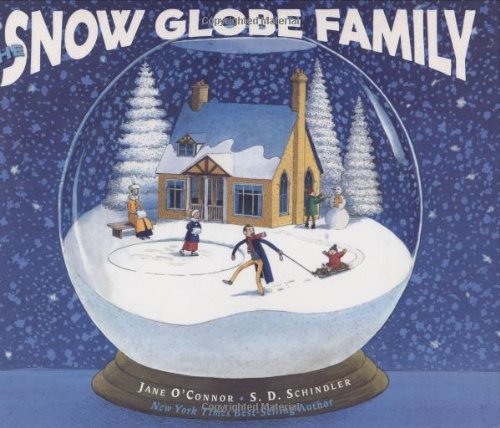 In this enticing, snappily written tale-within-a-tale, O'Connor ( ) introduces two Victorian families, each consisting of a mama, papa, boy, girl and baby. The first family lives in a sprawling, turreted house on whose parlor mantel sits a snow globe, which is home to the second family. The snow globe "has been there such a long time, nobody notices it anymore—nobody except Baby." It is winter year round in the snow globe, and the little family within builds snowmen "as big as lumps of sugar" and skates on a pond "as shiny as a silver coin." The diminutive children love to hear their father's stories of the "big snowstorms from long ago" and pine for a blizzard instead of the gently flurry that occurs when the parlor maid in the big house does her weekly dusting. One evening, as snow falls outside the big house, Baby endeavours to reach the snow globe. In a priceless spread, Schindler ( ) depicts Baby's big eyes as seen by the snow globe family. When Baby loses her balance, she shakes the snow globe into the blizzard that the tiny family was waiting for. Meanwhile, the big family experiences a blizzard of its own. Rendered in colored inks and gouache, Schindler's art brings this whimsical concept to life with subtle humor and treats readers to lavish Victorian particulars and some entertaining perspectives as the wee and life-sized worlds intersect. Ages 4-up.