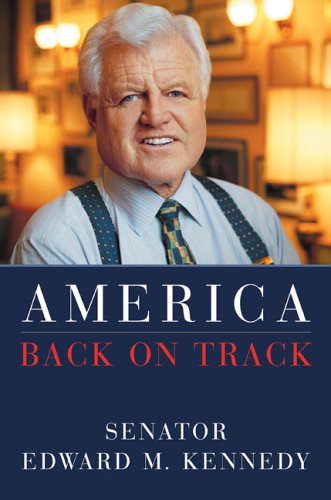 America Back on Track

As the title implies, Senator Kennedy's book of political history, criticism and advice is an effort to reawaken the belief in progress that underlay politics in the 1960s, often lauding his brother's presidency and Johnson's just after. Kennedy presents some of his most important points in bulleted lists, giving the appearance of simplicity and clarity on complex topics like ways to adjust to globalization and "the shrinking world," steps to achieve "a sound energy conservation policy" and how to provide health care for all. Although Kennedy isn't often as clear as his bulleted points make it appear, his straightforward solutions—like equal federal, state and local government funding for education and an increase in the minimum wage to $7.25—are refreshing. Not unexpectedly, Kennedy's proposals also involve sharp criticism of the Bush administration: for focusing on the military war on terror rather than taking a broader view of global security; for the "politicization" of government agencies and departments like the FDA; for undermining civil liberties. His book will probably not start the next revolution, but Kennedy's talking points and proposed solutions offer a good basis for discussion, which, after all, is one aspect of democracy—which he fears is disappearing, or rather, being repressed.