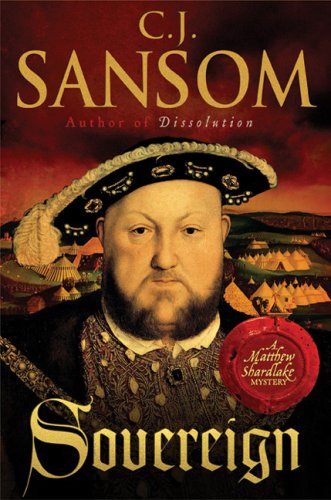 Sansom's engrossing third historical featuring Matthew Shardlake (after 2005's ) finds the hunchbacked barrister at the vortex of strife-torn Tudor England in the rainy autumn of 1541. Northern Britain anxiously awaits the arrival of the Great Progress taking Henry VIII and an entourage of thousands toward York to quell a fresh rebellion. Recently appointed a legal counsel for the Progress, Shardlake has a secret mission from Archbishop Cranmer to guarantee the safe return to London of imprisoned conspirator Sir Edward Broderick. With his trusted assistant, Jack Barak, Shardlake also investigates the death of master glazier Peter Oldroyd, a suspected papist, who fell from his ladder and was impaled on glass shards. Their search of Oldroyd's house reveals intriguing documents that question the royal line of succession and even impugn Henry. Despite complex court politics and several attempts on his life, Shardlake stalwartly maintains his integrity while searching for truth amid the "vipers' nest" of Henry's court.