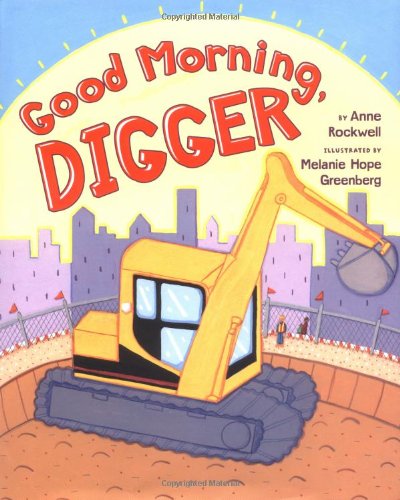 In this tale tailor-made for fans of construction, a boy lands a front row seat as, outside his window, the vacant lot next door is transformed into a new community center. First to show up on the site is Digger, the Numero Uno of heavy equipment—"big and strong and yellow!" In Greenberg's spread, the backhoe bursts from the edges of the pages, as Rockwell's text records its sound: " " A parade of trucks follow, all helping to turn Digger's hole into a real building (Cement Mixer, Tall Crane, etc.). And Silver Truck serves the important role of making sure Digger's hard-hatted helpers have a "good lunch to eat" during their breaks from welding and hammering the building's steel frame. Rockwell gives her narrator a voice that's one part play-by-play announcer, one part master of ceremonies: "Goodbye, Dump Truck! Carry away the mountain of dirt that Digger dug. Then come back to get some more. ." The doll-like workers also exude well-orchestrated busyness, as Greenberg examines the work site from a variety of angles; she flattens the perspective in one early scene so readers can appreciate the depth and breadth of Digger's handiwork. The artist captures and celebrates the essential bulk that makes each vehicle so impressive to young eyes. Ages 3-up.