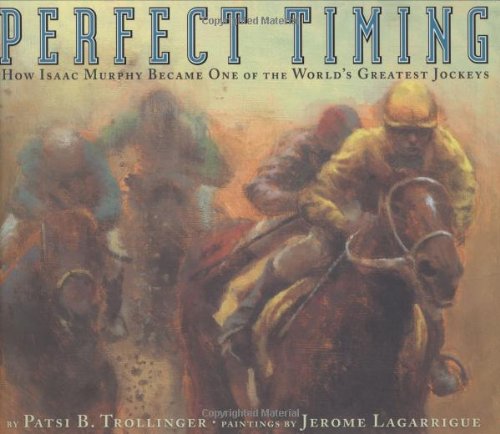 Perfect Timing: How Isaac Murphy Became One of the World's Greatest Jockeys

Newcomer Trollinger's fluid narrative conveys 12-year-old Murphy's determination when this Kentucky lad, the grandson of slaves, catches the eye of a racehorse owner and gets the opportunity of a lifetime. The man invites him to try riding, and Murphy's performance earns the boy a place in jockey school where "every classroom was a stable and every lesson was a horse." Murphy falters during his first race but goes on to win many others—including three Kentucky Derbies—and still holds the jockey record for the highest percentage of racing wins ever. His life also acts as a cautionary tale: because Murphy had a tendency to gain weight, he often went on crash diets before the racing season to trim down, and one final diet rendered him so weak that he contracted pneumonia and died in 1896 at the age of 35. Yet despite his short life, Murphy's legacy lives on: he was one of the first inductees into the Jockey Hall of Fame, among other honors. Though featuring unusual texture, Lagarrigue's ( ) shadowy, at times muddy paintings do little to bring Murphy to life, but his scenes of the race track capture both the drama and grace of the animals and their riders. Ages 7-up.