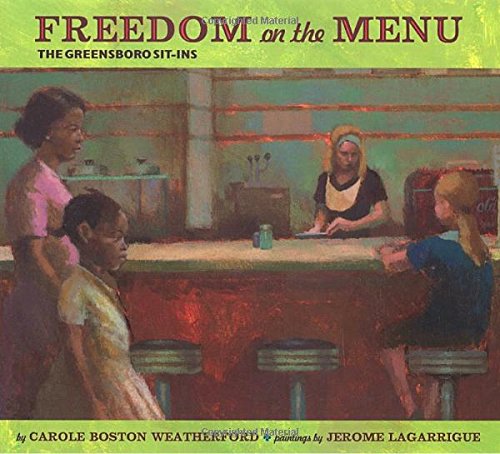 FREEDOM ON THE MENU: The Greensboro Sit-Ins

Weatherford ( ) offers a fresh and affecting interpretation of a pivotal event in the civil rights movement. In 1960, four young black men sat down at a segregated Greensboro, N.C., Woolworth lunch counter and asked to be served, sparking a seven-month long protest in that city and inspiring sit-ins throughout the South. As a prelude, narrator Connie explains that she and her mother would often stop for a snack at the five-and-dime store, standing up as they sipped their sodas "because we weren't allowed to sit at the lunch counter." To bring the event home, Weatherford casts friends of Connie's older brother as the famous Greensboro Four, and later Connie's brother and sister also get involved in the protest. The author uses the wise voices of the girl's parents to address age-appropriate questions (e.g., when Connie says she would be too hungry to wait for hours at the lunch counter, as those four did, her father gently explains, "They didn't really want food.... They wanted to be allowed to get it, same as if they were white. To be treated fairly"). Lagarrigue's ( ) impressionistic paintings in what appear to be layers of oil paints, capture the story's considerable emotion: the protestors' determination, their opposers' disdain, and Connie's concern and ultimate joy as she, in the finale, digs into a banana split at the Woolworth lunch counter. Together, author and artist translate a complex issue into terms youngest readers can understand, in a resonant meshing of fact and fiction. Ages 5-up.