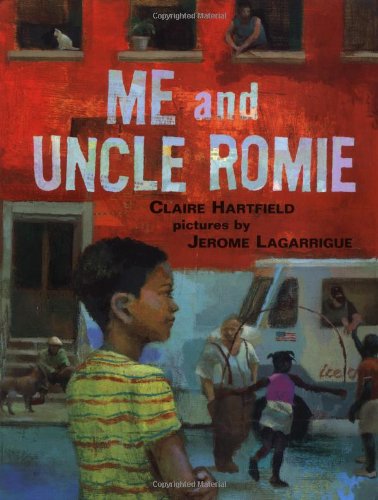 ME AND UNCLE ROMIE: A Story Inspired by the Life and Art of Romare Bearden

Art inventively imitates art in this engaging volume. Newcomer Hartfield's fictional tale draws upon the work of collage artist Bearden who, as a child, moved from his native North Carolina to Harlem. Lagarrigue's () softly focused acrylic paintings introduce collage elements as they effectively evoke the story's period setting, which shifts from the rural South to Manhattan. While his mother awaits the birth of twins, narrator James travels by train to visit his Aunt Nanette and Uncle Romie, who is working hard to finish paintings for his upcoming art show. The man remains behind the closed doors of his studio as his wife shows their nephew the sights of the city. Lagarrigue retains his own style while incorporating the turquoise, brick red, fuschia and other hues so prominent in Bearden's work; the compositions of his cityscapes in particular recall the giant collage (1971). James becomes enamored of bustling Harlem, where he plays stickball and partakes in a rooftop barbecue. On his birthday, the lad wanders into his uncle's studio and is thrilled to discover that Bearden's art captures his favorite spot: "Looking at Uncle Romie's paintings, I could Harlem—its beat and bounce." In the satisfying ending, James, back at home with his new twin siblings, feels inspired to create his own collage as a birthday gift for his uncle. Concluding tips on making collages may well encourage readers to do the same. Ages 5-up.