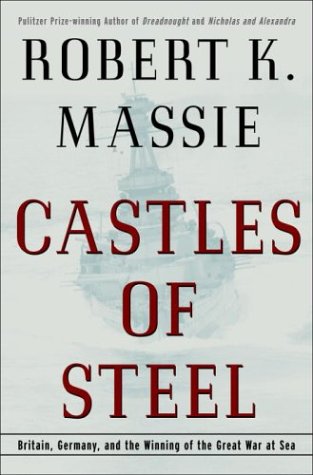 CASTLES OF STEEL: Britain, Germany, and the Winning of the Great War at Sea

The Pulitzer Prize–winning author of returns with a sequel to that is imposing in both size and quality, taking the British and German battle fleets through WWI. The fluent narrative begins amid the diplomatic crisis of July 1914 and ends with the scuttling of the German High Seas Fleet at Scapa Flow in 1919. Massie makes a coherent if long narrative out of a sequence of events familiar to students of naval history but probably not to many other potential readers. The focus is on the two fleets that confronted each other across the North Sea, their weapons and tactics and their complex and controversial leaders, both military and political. As in his other books, the author describes his cast of characters with the vividness of a novelist, British Admiral Beatty's disastrous marriage being a painful case in point. What emerges from that focus is not only a number of outstanding battle narratives (Jutland is only the most famous), but a closely argued case for the German fleet having been a disaster for its country's war effort. Once built, the High Seas Fleet made war with England and the blockade of Germany inevitable. Unable to break the blockade with that expensive fleet, Germany felt compelled to choose between a negotiated peace and unrestricted submarine warfare. Once the Germans chose the latter course, American intervention and disaster become nearly unavoidable. It may seem odd to describe a book of this size as an "introduction," but readers will soon understand that the size of the topic requires a long narrative. "Castles of steel" was Winston Churchill's grand phrase for the Grand Fleet and its German counterpart, and this unusually fine military narrative lives up to it as well.