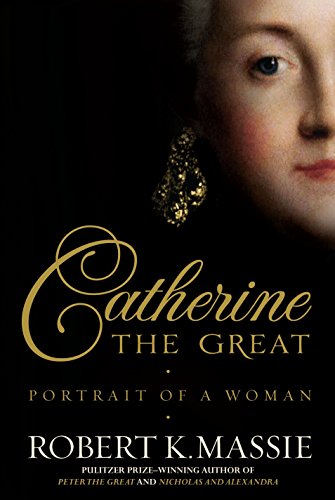 Catherine the Great: Portrait of a Woman

The Pulitzer-winning biographer of Nicholas and Alexandra and of Peter the Great, Massie now relates the life of a minor German princess, Sophia of Anhalt-Zerbst, who became Empress Catherine II of Russia (1729–1796). She was related through her ambitious mother to notable European royalty; her husband-to-be, the Russian grand duke Peter, was the only living grandson of Peter the Great. As Massie relates, during her disastrous marriage to Peter, Catherine bore three children by three different lovers, and she and Peter were controlled by Peter’s all-powerful aunt, Empress Elizabeth, who took physical possession of Catherine’s firstborn, Paul. Six months into her husband’s incompetent reign as Peter III, Catherine, 33, who had always believed herself superior to her husband, dethroned him, but probably did not plan his subsequent murder, though, Massie writes, a shadow of suspicion hung over her. Confident, cultured, and witty, Catherine avoided excesses of personal power and ruled as a benevolent despot. Magnifying the towering achievements of Peter the Great, she imported European culture into Russia, from philosophy to medicine, education, architecture, and art. Effectively utilizing Catherine’s own memoirs, Massie once again delivers a masterful, intimate, and tantalizing portrait of a majestic monarch. (Nov.)
close
Details