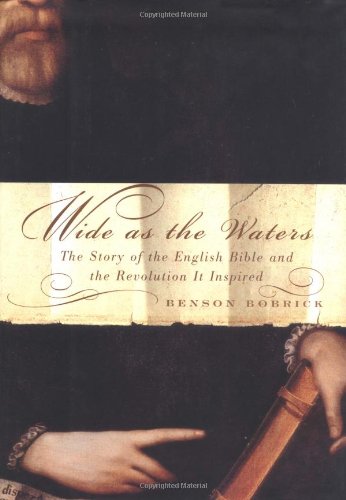 WIDE AS THE WATERS: The Story of the English Bible and the Revolution It Inspired

Independent scholar Bobrick's (; etc.) erudite yet accessible history chronicles the turbulent period from the first English translation of the Bible, sponsored by John Wycliffe in 1382, to the King James Version in 1611. Rendering the Scriptures in the vernacular was an act fraught with peril, he reminds readers. Simply possessing a Wycliffe Bible was enough to get a layperson tried for heresy. William Tyndale, whose early-16th-century renderings of the New Testament and Pentateuch greatly influenced the King James translators, saw his work confiscated and destroyed by English ecclesiastical authorities; he was burned at the stake in 1536. Though Henry VIII's break from Rome prompted more English versions in the late 16th century, conservatives still feared that giving the common people access to the Scriptures would lead to civic as well as religious unrest; eventually, the Civil War of 1642–1649 suggested they were right. Succeeding Elizabeth in 1603, James I aimed to consolidate his position as head of church and state with a new Bible that would take the best from all previous English versions and maintain the Anglo-Catholic terms (such as "church" rather than the more Puritan "congregation") favored by the Bishop's Bible of 1568. Bobrick offers cogent minibiographies of the remarkable team of scholars James assembled, and his lucid exegeses show how seemingly small changes (from "the earth was void and empty" into "the earth was without form and void") transformed the text, rendering it majestic yet easily understandable. Bobrick's analysis of how dissemination of the Bible helped spark the Civil War is oversimplified, but historians have long agreed that putting the Scriptures in the hands of the people was indeed a revolutionary act. It's a pleasure to have this stirring story so well told for the general reader.

The Professor and the Madman