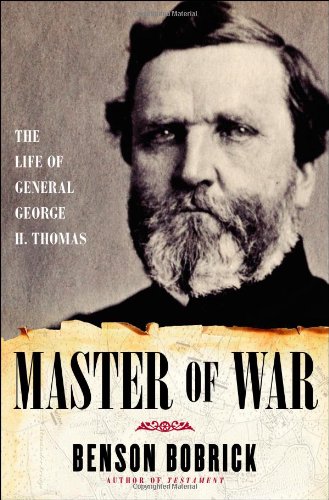 Master of War: The Life of General George H. Thomas

George Thomas remains one of the less studied and less appreciated Union generals in the Civil War. In the first full-scale biography for decades, historian Bobrick ( ) presents a Virginian who stood by his oath to the United States; a commander who saved Kentucky for the Union; brought the Army of the Cumberland out of disaster at Chickamaugua to glory at Missionary Ridge; and destroyed an entire Confederate army at Nashville. Bobrick describes Thomas as consistently victimized by generals Sherman and Grant, who created from whole cloth an enduring image of Thomas as slow to act and think. Bobrick makes a convincing case that the only time Thomas was “slow” was in retreating under fire. Above all, Thomas understood that the modern high-tech battlefield required not heroic inspiration but deliberate preparation. When the time was right, he acted with a decisiveness comparable among his contemporaries only to Prussia’s Helmuth von Moltke. Bobrick considers Thomas the greatest Union general. That remains open to argument, but he incontrovertibly stands in the 19th century’s first rank as a master of war. 16 pages of illus.; maps.