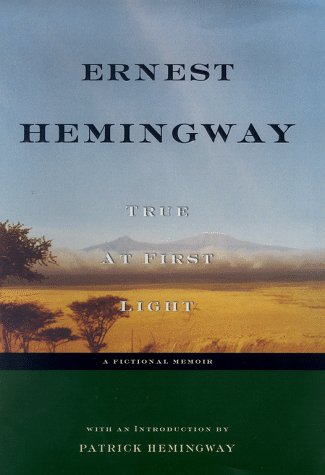 More a curiosity than a major contribution to his oeuvre, this fictional memoir of a 1953 safari in Kenya, edited by Hemingway's son Patrick from a first-draft manuscript and published to celebrate the 100th anniversary of Papa's birth, is a sometimes entertaining, sometimes trying read. Hemingway narrates the rambling story in his own voice, and others, including his wife, Mary, are identified by name. More humorous than most of Hemingway's novels, the narrative also contains enough hunting scenes for Hemingway and others to show the requisite grace under pressure. The old Hemingway magic flashes sporadically, like lightning, but not often enough. There are a series of sentences intoning ""I wished..."" reminiscent of his earlier linguistic triumphs, and some dialogue, crisp and to the point, like the stichomythia of Greek tragedy. Lines like ""So I carried her in and she weighed just what a woman that you love should weigh when you lifted her in your arms...."" still resonate. The Kenyan setting is atmospheric, but the promising elements of the plot--a possible Mau Mau attack on the camp, Miss Mary's determination to kill a lion--too often stagnate for lack of action and dramatic tension. Some uneasiness occurs between Hemingway and Mary over Hemingway's attraction to an African woman, Debba, but even this is pretty tame. A supporting cast of African characters are not distinct individuals, and the prolific use of Swahili words is often confusing in spite of a glossary. Yet, as prose by Hemingway, no matter how distanced and imperfect, the book is still worth reading. Perhaps it will inspire new readers to delve into Hemingway's true legacy, the novels and stories like ""Cat in the Rain,"" and ""The Short Happy Life of Francis Macomber."" BOMC main selection; first serial to the New Yorker; rights sold in Denmark, England, France, Germany, Iceland, Italy, Norway, Poland, Spain, Sweden and the Czech Republic. (July)
close
Details