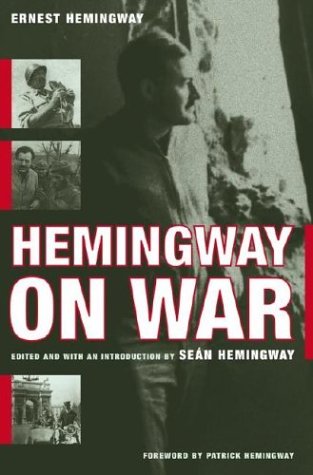 Edited by his grandson, Sean, this collection of Hemingway's best, and sometimes most obscure, short stories, novel excerpts, and war correspondence chronologically traces the author's account of modern war and its aftermath through the first half of the 20th century. The book includes portions of his popular war novels, A Farewell to Arms and For Whom the Bell Tolls, and his less acclaimed Across the River and Into the Trees, and only play, The Fifth Column, interspersed with short stories. The editor has gathered, among others, pieces from his grandfather's first published collection of short stories, In Our Time, as well as some of his first dilettante-ish attempts at writing, like""The Mercenaries,"" which was written in 1919 but only appeared in 1985 in the New York Times Magazine. Although the collection emphasizes fiction, the combat-hardened author's preferred medium, it also comprises decades of war correspondence, like the classic 1937 dispatch from Madrid,""A New Kind of War,"" a 1922 exclusive interview with Mussolini in""Fascist Party Half Million"" and a reflection on growing tensions in the Pacific from a 1941 trip to Japan and China in""Russo-Japanese Pact."" The foreword by Hemingway's son, Patrick, is full of anecdotal memories of the author, such as his unhappy lunch with FDR, during which the President lectured the recently returned veteran on the Spanish Civil War, and his collaboration with Naval intelligence to arrest German agents disembarking in Cuba during WWII. Sean Hemingway's introduction provides a biographical context for the pieces and additional nuggets of personal correspondence. In one letter, Hemingway explains how he tries to write a balanced portrayal of war,""taking it slowly and honestly and examining it from many ways."" This collection illuminates many sides of Hemingway's thoughts on conflict, even if the reader may come no closer to understanding war itself.
close
Details