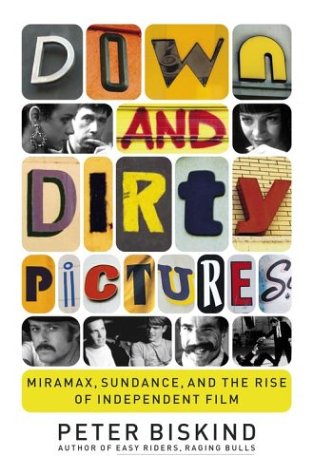 DOWN AND DIRTY PICTURES: Miramax, Sundance and the Rise of Independent Film

According to Biskind ( ), most people associate independent filmmaking with such noble concepts as integrity, vision and self-sacrifice. This gritty, ferocious, compulsively readable book proves that these characterizations are only partly true, and that indie conditions are "darker, dirtier, and a lot smaller" than major studios' gilded environments. The intimidating image of Miramax's Harvey Weinstein plows powerfully through Biskind's saga; the studio honcho emerges as a combination of blinding charm and raging excess, a boisterous bully who tears phones out of walls and overturns tables. Former Miramax exec Patrick McDarrah, in comparing Weinstein with his brother and partner, Bob Weinstein, concludes, "Harvey is ego, Bob is greed." These two volatile personalities directly—and fascinatingly—contrast with the book's other protagonist, Sundance creator Robert Redford. Biskind presents Redford as passive aggressive, an invariably polite conflict avoider, but also notorious for keeping people waiting and failing to follow through on commitments. Because of the actor/director's elusive persona and his artistic tastes—which Biskind describes alternately as puritanical, conservative and mushy—the Weinsteins dominate throughout. Biskind brilliantly covers their career hits, from the high-profile acquisition of Steven Soderbergh's through backstories for , and to brutal clashes with Martin Scorsese over . And Quentin Tarantino's lust for stardom, Billy Bob Thornton's "ornery, stick-to-your-guns" personality and Ben Affleck's frustration about being underpaid are just a few of the other mesmerizing elements Biskind includes. Above all, Biskind conveys a key truth: the Weinsteins and Redford, whatever their personal imperfections, possess courage and a deep, overwhelming love of film.