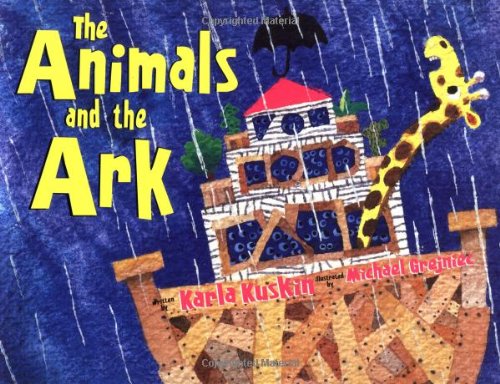 THE ANIMALS AND THE ARK

Originally published in 1957, Kuskin's () energetic ode to the Flood receives equally upbeat, playful treatment in Grejniec's () watercolors. In the opening lines, Noah mysteriously divines the coming rainstorm (with no mention of God): "He said, 'I think it's going to pour./ It's going to rain and rain some more./ The sun will dim,/ the day turn dark,/ with all that rain/ I'll need an Ark.' " The poet's rhythm and rhyme unfold with deceptive ease, yet she varies the schemes to create a sense of urgency or to pause for a laugh—for instance, she describes the cargo area of the vessel: "with room inside/ for the fowl of the air/ for the mole from his hole/ and the lynx from his lair/ for rats/ and cats/ and calves and cows/ for rams and lambs/ and snakes/ and sows." Grejniec exploits the syncopation and the humor with a spread of the named animals; silhouetted as white space within its own bold block of color, each animal is simultaneously present and absent. The artist's signature technique of greatly magnifying his compositions highlights the texture of the paper, adding to the visual intrigue. As the Ark nearly disappears within the torrents of rain, Kuskin lessens the danger by depicting the animals as very much like children: they "ate and slept and played inside/ at 'Hide-and-Seek' and 'Make a Nice Motion'/ while the whole wide world was covered with ocean." This cheerful tale closes not with an olive branch, but with the sun breaking through the clouds. By focusing on the experience of the animals rather than theology, author and artist provide an unusually friendly entree to the story of the Ark. Ages 3-8.