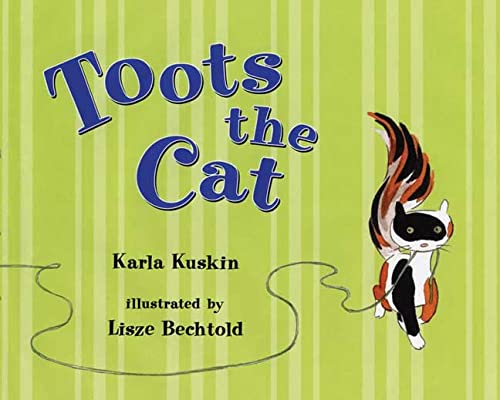 Kuskin's ( ) meditations on a stray calico cat brim with images that surprise. The poems capture the curiosity, independence and quixotic nature of cats with metaphors that elicit an immediate visual image: Toots "walks/ like a couple of ballerinas/ across the bright meringue/ of untouched snow," or rests "in a sun pool/ like a curled fur shell." Bechtold's ( ) black-lined watercolors occasionally match the uniqueness of the verse, especially in images for the aforementioned poems. But Tootsie's exaggerated tail and spotted dog-like fur are not always consistently rendered. Some illustrations seem overly familiar: Toots hangs from a screen door like a Garfield toy suction-cupped to a car window and a Siamese cat walks with her head in the air reminiscent of the snooty cats from Disney's . Taken as a whole, both art and text capture a girl's experience of the frustration and joy concomitant with tending a household of cats. The verses add up to a plaintive eulogy for a much-loved pet who disappears one night as mysteriously as she arrived ("though she was willful/ and wild as a loon,/ she is gone./ It's too soon./ It's too soon./ It's too soon"). Kuskin's insightful, original perspectives are sure to appeal to cat lovers. Ages 4-8.