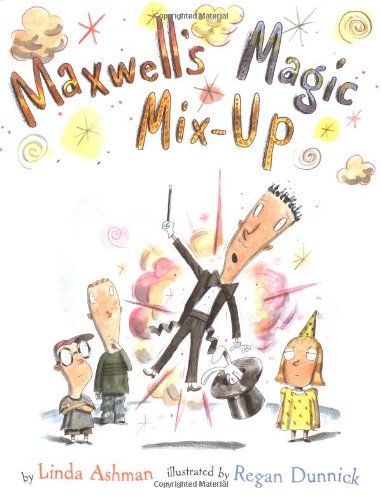 A bumbling magician named Maxwell wreaks havoc when he steps in at the last minute to entertain at Louise's birthday party. The disaster unfolds in a series of witty, staccato quatrains: "Party starts. Magician enters./ Hocus pocus! What a shock!/ Stumbles through his incantation.../ Turns Louise into a rock." In short order various guests are transformed into a bird, a cat, a pig and so on. Louise's furious father demands a quick fix, but ends up a broom ("I can tell my father's angry./ For a broom, he looks quite mean./ He is sweeping like a demon./ Never seen the floor so clean"). After the hapless Max accidentally conjures up a marching band, he throws in the towel and calls in his young nephew to set things right. The brisk, upbeat tempo of Ashman's () clever verses enhances the farcical tone of the proceedings. First-time illustrator Dunnick, meanwhile, matches the pace with boisterous cartoons, all bustle and panic. The expressions of his droll, bug-eyed characters range from deadpan to quizzical to alarmed, and many of the set pieces have a goofy gleefulness, as when the surprised-looking guests are suddenly restored to their original forms, the father still propped against a door and a girl crouched atop a bookcase. Frothy fun. Ages 4-8.