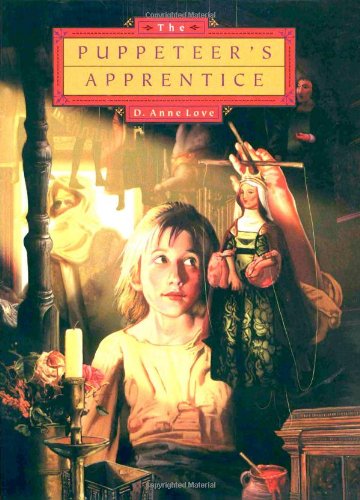 Love () takes readers to early–18th-century England to imagine the life of a runaway who becomes a puppeteer. Mouse, abandoned as a babe on the steps of a manor, slaves as a scullery maid until she panics under the threat of a brutal punishment and flees. Good fortune and her own scrappiness lead her to a puppet show at a town fair, and with still more determination and bravado, she convinces the puppeteer to take her on as an apprentice. Love sketches an eclectic cast and packs in plenty of historical details as she portrays the freedoms and perils of the puppeteer's vagabond life. Much of the emotional impact relies on the growing relationship between Mouse and her elusive master, who travels in disguise and possesses tightly guarded secrets. The underlying mysteries here, on the other hand, prove less successful. Love plants red herrings about Mouse's parentage but leaves the question hanging. In unraveling the puppeteer's identity, the author places Mouse at the center of a daring climactic rescue but sums up much information after the action. Even so, there's enough momentum to distract from the flaws. This colorful novel is likely to interest fans of Karen Cushman's , to which it often seems indebted. Ages 8-12.