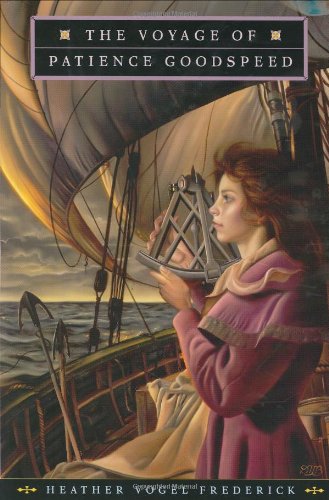 THE VOYAGE OF PATIENCE GOODSPEED

With the clever, nearly 13-year-old narrator, Patience, at the helm, this fast-paced debut novel successfully steers through a whaling expedition and mutinous uprising. Though Patience would rather honor her recently deceased Mama's plan that she study mathematics at home on Nantucket, her captain father insists she and her six-year-old brother, Thaddeus (Tad), accompany him on his whaling ship. However, once aboard the , her father initially dismisses her interest in navigation—until she proves herself in her lessons (she also demonstrates her talents in the galley—the author includes two favorite recipes). Frederick spices up the journey with an eclectic cast and crew, including Glum the dour cook, two thugs Patience nicknames Bunion and Toad, and a traitor named Bridgewater whom she dubs Bilgewater. She also weaves into the plot atmospheric details about whaling, the layout of the ship and navigational instruments, and supplements her research with facts about infamous whaling vessels such as the and insider terms that kids will eat up, such as "Nantucket sleigh ride" the whalers' name for the breakneck chase after the prey. Patience also keeps a diary, which in some instances offers a slightly revised rehash of events but, for the most part, complements the text. Though readers will enjoy the whaling adventure, the brave heroine makes this historical adventure most memorable. Ages 8-12.