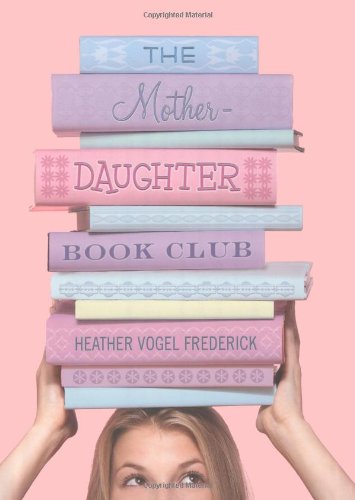 Allusions to , sprinkled throughout this contemporary novel, may well pique the interest of Louisa May Alcott buffs. Frederick (the Patience Goodspeed books; the Spy Mice series) alternates the perspectives of Emma, Megan, Cassidy and Jess, members of a mother-daughter book club who are reading while adjusting to their first year of middle school. Emma, an aspiring writer, has grown apart from her former best friend, Megan, who gained entry into the popular crowd after her father's invention made the family rich. Despite her heightened status, Megan isn't altogether happy, since her mother scorns her dream of becoming a fashion designer. Meanwhile, tomboy Cassidy mourns the loss of her father, who was killed in an accident, and Jess misses her mother, who has gone to New York to pursue an acting career. All of the girls are less enthusiastic about the book club than their parents are, but as might be expected, their attitudes change as they become absorbed in and its author, who grew up in their hometown of Concord, Mass. The girls' increasing sensitivity to each other's problems is convincing, but the way in which each character finds happiness (during a whirlwind trip to New York City) is more dependent on lucky circumstance than personal achievement. Still, this club's success in uniting a group of disparate sixth-graders may well inspire readers to start one of their own. Ages 9-12.