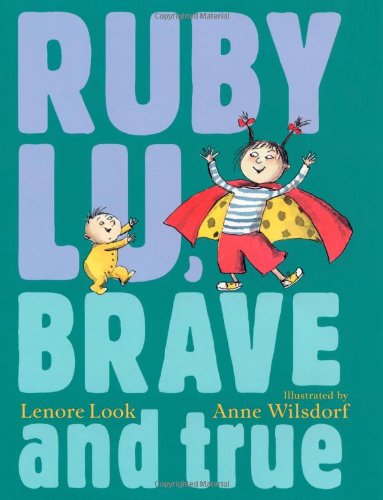 Look ( ) introduces a plucky Chinese-American heroine in this chapter-book series opener. "The best thing about living on 20th Avenue South was everything," states the peppy if occasionally precious narrative, written from the perspective of almost-eight-year-old Ruby Lu. Readers meet Ruby's mother (who takes Chinese fan-dancing lessons), her father (a champion knitter and Scrabble fanatic), her grandparents (who mostly speak Chinese) and her baby brother, Oscar (whom she adores even though he steals her thunder while she's performing a backyard magic show). In mostly diverting episodes, Ruby desperately attempts to teach Oscar to talk after her friend's baby brother begins to speak; she introduces herself as a tree frog on the first day of Chinese school, when a classmate, also named Ruby, fancies herself a gecko; and—in a hopelessly unrealistic frame—climbs behind the wheel of the family car and drives herself and Oscar to school. Look's similes can strike a false note (e.g., when Oscar's antics distract Ruby's magic-show audience, she "felt all her love for him drying up like spilled soda on a hot sidewalk"), yet on the whole the character is vivacious enough to make the audience want to believe in her. A cousin from China moves in with Ruby's family at tale's end, setting the scene for the second installment, and kids who have taken a shine to the likable lass will look forward to her return. Final art not seen by . Ages 6-10.