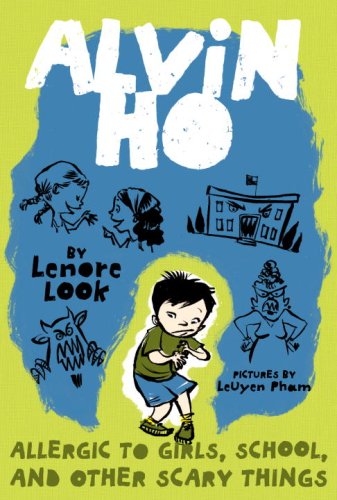 Alvin Ho: Allergic to Girls, School, and Other Scary Things

Alvin Ho, a Chinese-American second-grader with “so-so performance anxiety disorder,” is afraid of just about everything: elevators, tunnels, kimchi, wasabi. But one thing is especially frightening: “I have never spoken a word in school,” Alvin says, and he's mystified, “since I come from a long line of farmer-warriors who haven't had a scaredy bone in their bodies since 714 AD.” By the end of the story, his fears are pretty much intact—but he's found a friend, made progress on his “How to Be a Gentleman” list and learned that joining a “gang” is for the birds. Look's (the Ruby Lu series) intuitive grasp of children's emotions is rivaled only by her flair for comic exaggeration, as in Alvin's description of his elderly piano teacher: “She bent like a question mark... and looked exactly like her pictures in .” It's perfection that Alvin's friend turns out to be his once-despised desk buddy, Flea, a one-eyed girl with one leg longer than the other, “like a peg leg”; she prides herself on her understanding of him, and he enthusiastically thinks her eyepatch and legs make her look like a pirate. Ahoy! Ages 6–10.