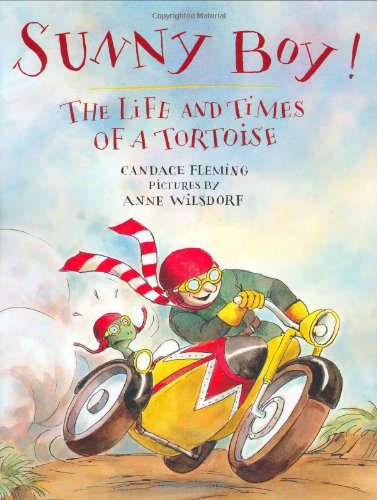 Sunny Boy! The Life and Times of a Tortoise

Fleming ( ) embellishes the true story of a 1930 stunt in this picaresque tale, told by a tortoise. "I have always longed for the quiet life," begins Sunny Boy, who careens from one adventure to the next. Originally slated to become turtle soup, Sunny Boy is rescued by a horticulturist who "sang to his orchids while I basked in the blossom-sweet sunlight.... Year after quiet year. But alas! Men do not live as long as tortoises." Sunny Boy trails a 19th-century funeral parade, and in quick succession he goes to live with a stamp collector, with a Latin scholar and, against his better judgment, with "Biff the brave! Daredevil extraordinaire!" As a 20th-century stuntman's pet, slow-moving Sunny Boy gapes at high-speed mishaps. In comic watercolors, Wilsdorf ( ) pictures him seated stiffly in Biff's motorcycle sidecar and visiting Biff in the hospital. Bruised but unbowed, Biff makes plans to chute Niagara Falls in a barrel, with his favorite reptile for company ("I shuddered in my shell," says the tortoise). Fleming reveals her story's inspiration in an afterword: "The real Sunny Boy was one hundred years old when he made this perilous trip" with George Stathakis. She gives happy endings to both Sunny Boy and Biff, but in actuality the tortoise was the sole survivor. Like Rachel Field's Hitty the doll, Sunny Boy has staying power and an engaging disposition, and ultimately he finds his placid, well-deserved bliss. Ages 5-8.