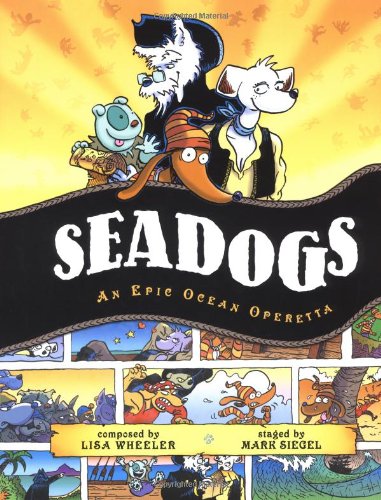 In the wordless sequence that opens this swashbuckling comic-strip "operetta," a puppy settles into her theater seat, actors put on makeup and the curtain rises on five singing sailor dogs. A canine chorus, which makes regular appearances, howls rhyming verses about three excitement-seeking hounds. As the chorus sets the scene in a port town worthy of R.L. Stevenson (or Gilbert and Sullivan), cartoon images depict an alehouse meeting between a scruffy schnauzer called Old Seadog, a flop-eared heroine named Brave Beagle and a loyal ship's cook known as Dear Dachshund. The trio repairs a "bonny ship" and sets sail: "Then fare you well, ol' Corgytown,/ fare you well, we sing./ We're off to find adventure where/ a dog can be a king!" As they come under attack from pirates led by Jacques Fifi ("the Terrier of the Sea"), shanties titled "The Mongrel Horde" and "Disem " chart their fitful progress toward buried treasure. Debut illustrator Siegel divides the pages into tight panels of pen-and-ink and digital color, and pays close attention to the shipboard cabins and rigging. He deftly details the characters and settings, shifting from the high seas to the theater interior with disarming ease, and he plays up the coy allusions (one image of snarling pirates is attributed to "N.C. Waggeth," and the doggy villains stage a "Muttiny" against their dandyish captain). Readers may find themselves skipping Wheeler's ( ) lengthy songs in favor of Siegel's pictorial storytelling, which keeps this sometimes soggy yarn-within-a-yarn afloat. Ages 7-10.