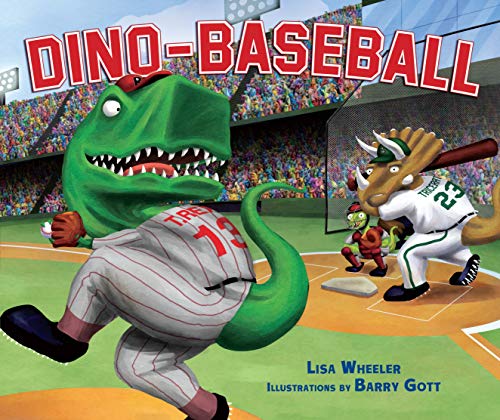 Wheeler and Gott already proved they have a winning formula with (2007) and (2009), and there's plenty for dinosaur/sports fanatics to enjoy in this latest installment (the final page hints at a basketball follow-up). It's a beautiful day in Jurassic Park (ballpark, that is), and the herbivores and carnivores are taking the field for the season's final game. The crowd is enthusiastic—and similarly extinct. Wheeler's sturdy, concise couplets provide a nicely percussive play-by-play: “Stego rumbles down the line./ Compy calls, 'This one is mine!'/ Gloves the ball. Throws him out./ what baseball's all about!” (The dinosaurs' nicknames are set in contrasting type; a list of their full names can be found in team rosters displayed on the Jumbotron on the first page). Gott nails the drama of high-stakes game with a series of skewed perspectives and never overplays the comedy—his dinosaurs, with their imposing heft and improbably balletic grace, are more than capable of conveying the sublime absurdity of it all. Ages 5–9.