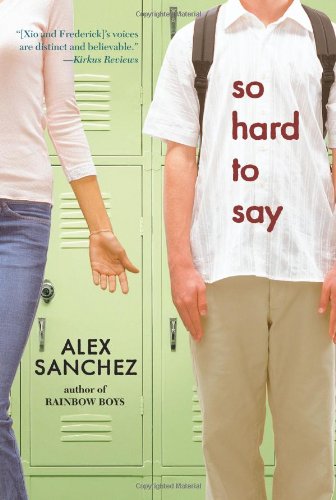 SO HARD TO SAY

In chapters that alternate between Frederick, a new eighth-grader, and María Xiomara Iris Juárez Hidalgo ("Xio"), Sanchez's ( ) insightful novel explores the ambiguities of budding sexuality. When shy Frederick transfers to her California school, lively Xio immediately develops a crush on him. They quickly become friends, and he joins her clique, but when they end up in a closet together during a kissing game at a party, Frederick is disturbed that he imagines kissing popular, handsome Victor instead. Readers will find it easy to empathize with both protagonists as Frederick gradually comes to terms with being gay—and shares his secret with Xio. The largely Mexican student body at their school provides an authentic backdrop for the novel (Xio weaves Spanish into her narration, and the boys Frederick plays soccer with call Iggy, another gay student, a " "). While a subplot about Xio's father also possibly being gay seems extraneous, and her circle of girlfriends somewhat scripted ( : a beauty "with a Barbie doll figure," a brain, a saint, a jock and a jokester who recently moved away—plus Xio), for the most part this is a well-crafted novel. The author maps out spot-on issues for this age group, from name-calling ("Everyone knows calling somebody gay is just about the worst thing you can say to them," Xio thinks) to self-questioning (in one scene, Frederick types the word "gay" into his Internet browser) to worrying about what others think (Frederick asks his father if he thinks gay people are "bad"). These believable narrators face realistic and complicated problems—and demonstrate an inspiring model of acceptance. Ages 8-12.