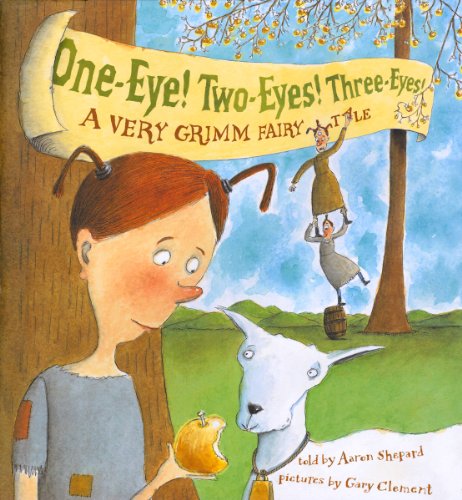 Shepherd's ( ) modern-day fairytale—part Cinderella, part Brothers Grimm—pokes fun at those stories in this retelling of a seemingly average girl who is chastised by her "ordinary" one- and three-eyed sisters for having two eyes and being "different." Clement's ( ) in-your-face illustrations populated with people in photographs, newscasters on television and heroes on book covers—all featuring anything but two eyes—further exaggerate this prejudice. Tired of being forced to eat microwaved leftovers, Two-Eyes sets out to walk her two-eyed goat when she stumbles upon a godmother-like figure who teaches her a magical rhyme. Suddenly, the otherwise disinterested One-Eye and Three-Eyes make it their business to find out what their sister is up to. The story line follows a predictable course right up to the end, featuring a knight (with two eyes) in shining armor who garners the attention of the two sisters as they compete for his affection. Much like the glass slipper that sealed Cinderella's fate, the aforementioned rhyme secures a place for Two-Eyes in the heart of the knight and ensures a happy ending for... well, almost everyone. Shepherd one-ups the classic fairytale by giving the cruel sisters their just deserts, and proves that updating a classic can be a treat for a new generation of readers. Ages 5-8.