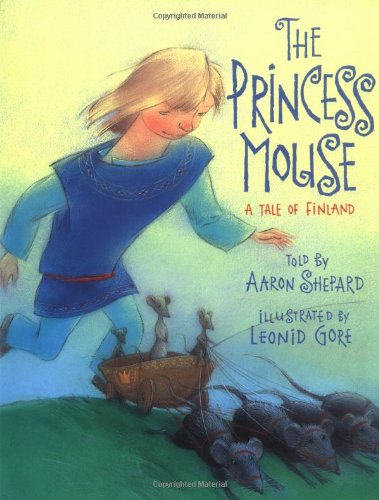 THE PRINCESS MOUSE: A Tale of Finland

Magical events and a moral dilemma give this Finnish tale its staying power. Mikko, the younger son of a farmer, must show courage in the face of scorn in order to win a beautiful bride. Shephard's () rhythmic prose follows Mikko as he chooses a bride according to his family's custom: he must cut down a tree and walk in the direction that the tree has fallen. When his tree points to the woods, Mikko finds a kindly mouse with a velvet coat "just like the gown of a princess!" Mikko's father sets up a weaving test for the two sons' prospective brides and, with the help of her mouse friends, Mikko's mouse passes. Mikko must overcome his dread that his brother, father and everyone else will think him a fool if he brings home a mouse bride, but he comes to a decision. "I think you're as sweet as any sweetheart could be. So let them laugh and think what they like." After an unexpected plot twist, the groom's resolve is rewarded when she transforms into a princess. Gore's () distinctively angled figures, drawn in pastel on rough paper, deepen the story's folktale feel. Scandinavian sun often shines on the characters' faces while the rest of the scene stays in chilly shadow; the northern spring can almost be felt. Ages 4-8.