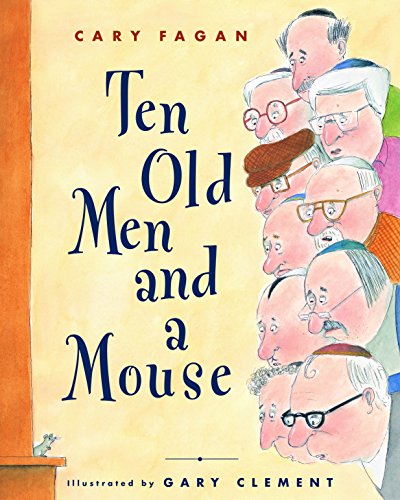 Ten Old Men and a Mouse

Like the perfect brisket, this book offers a deeply satisfying balance of sweet and sour that you don't have to be Jewish to enjoy. Membership at the venerable and once-bustling synagogue has dwindled down to 10 old men: Max, Nat, Bud, Al, Mose, Herm, Lem, Tov, Gabe, and the always-late Saul. So when this geriatric crew discovers a starving mouse hiding among the prayer books, they quickly abandon plans to trap it. After all, as Saul wryly notes, "He's the first new member we've had in thirty-five years." The story that unfolds endearingly affirms a distinctly Jewish worldview ("There isn't a cat or dog as smart as our mouse," says Herm proudly), while at the same time empathetically acknowledges that old age is not a day at the beach. "You'll hear from your kids again," Saul tells the mouse, after its true gender is revealed by the arrival of a large brood, which disbands some months later. "You know when? When they need something." Clement's ( ) editorial-style pen-and-inks with watercolor wash clearly spring from great affection; he knits the 10 old men into a tight, funny ensemble worthy of a Neil Simon comedy, embracing the story's slapstick while eschewing caricature. Fagan's ( ) dialogue-driven text is great fun to read out loud—full of kvetching, kibitzing and kvelling, yet written with a broad audience in mind. Ages 4-7.